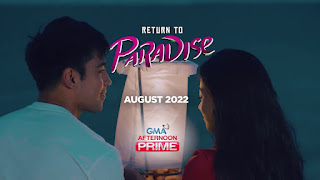 Return To Paradise is a drama series produced by GMA Network that follows the story of two college students, Eden Sta. Maria and Red Ramos , who were both marooned on an island after a plane crash. As they survive life in the wild, the two fall in love with each other. When they are rescued, Eden and Red find out that their parents have major conflicts that will affect their relationship. Leading the cast of this show are Kapuso hunk Derrick Monasterio, Sparkle actress Elle Villanueva, and seasoned actress Eula Valdes.